According to current doctrine, arrow guns are considered to be the forerunners of cannons in Central Europe, even before stone or metal balls were fired from barrels.

Since the early 14th century, there have been numerous entries in account books about the procurement of firearms, but these do not provide any information about their exact nature, so that their type can no longer be determined more precisely today.1) Two illustrations from 1326 in Walter de Milemete show the use of guns (so-called pot de fer or vase gun) as arrow rifles, which suggests knowledge of this functional principle among this author and their actual use.2)3) Later manuscripts also show the use of arrow rifles, such as two illustrations in a martial illuminated manuscript in the Central Library of Zurich from the period around 1420–1440, in which the guns have a guide rail for the arrow.4) Arrow rifles both with and without such a guide device have been described by Mariano di Jacopo, named Taccola, in his work De ingeneis from around 1440.5) A rifle that shoots a whole bundle of arrows can be found in the War Book and Bellifortis of the Austrian National Library Cod. 3069 from around 1411.6) The loaded arrow rifle depicted on page 79 in Johannes de Fontana's Bellicorum instrumentorum liber cum figuris stands out from the pieces depicted elsewhere because of its trumpet-shaped and ornamented barrel muzzle.7) 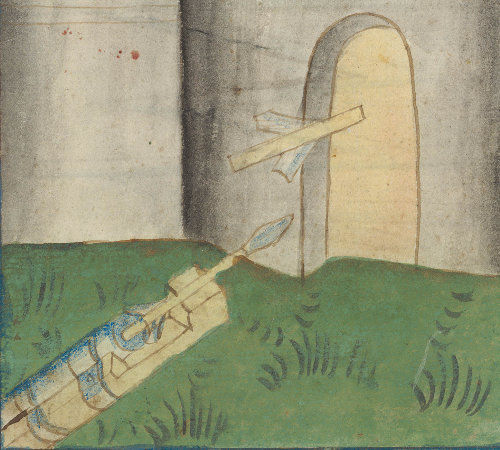 The only surviving arrow rifle is the Loshult Gun at State Historical Museum in Stockholm (Sweden), which corresponds well with the illustrations in Walter de Milemete, except for the design of the muzzle. In addition, there is some indirect written evidence of arrow rifles, such as from the French cities of Laon in 1356 and Dijon in 1358/1359, which ordered several hundred rifle arrows, or the Italian city of Bologna in 1381, where a local armoury inventory lists "274 muschitas impennatos de carta″, i.e. musket bolts fletched with parchment/paper.1) The term "muschitas″ (Spanish for muskets) suggests hand-held rifles, i.e. rifles to be carried in the hand, possibly similar to those depicted on folio 86r in the Fireworks Book of the Royal Armouries in Leeds, made around 1450 in southern Germany. Here a group of armed besiegers is depicted in front of a fortified town, some of them shooting incendiary arrows at the town with crossbows. In the background of the same group a man is holding up a handgun loaded with a fire arrow..2) 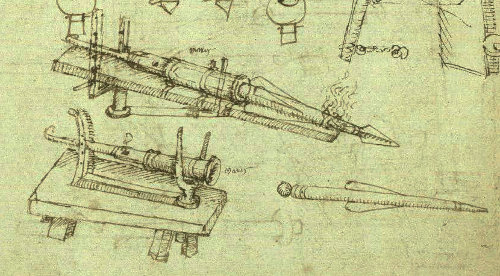 Further indirect evidence of arrow rifles comes from Eltz Castle in the municipality of Wierschem, Rhineland-Palatinate (Germany), where several rifle arrows have been preserved. With their fence diameters and lengths, these rifle arrows correspond very well with the technical data of the Loshult Gun.9) The timbers of two arrows could be dated to the late 12th and early 15th century by means of 14C-AMS analysis.10) Historical war technicians apparently continued to be involved with the technique of arrow shooting for a long time, as a drawing by the Monogramist MS from 1597 suggests. In an unknown work, he depicted a six-barrelled organ rifle on a loosely preserved book page and a musket for shooting arrows on the reverse side.11) But even today, arrows are still highly effective as projectiles (so-called flechets), for example as armour-piercing ammunition of bazookas or howitzers.

For the practical assessment of historically handed down black powder recipes, the Medieval Gunpowder Research Group at Middelaldercentret Nykøbing, Denmark in cooperation with the Royal Danish Army, conducted numerous firing tests with reconstructed Loshult Gun, successfully firing rifle arrows, lead balls and cartridges. The muzzle velocities, trajectories and ranges of the projectiles were determined by radar at the Danish Army's Oksbøl proving ground. Powder mixtures according to various historical recipes and in different granulations were used as propellant charges. Lead balls with charges of 50 g and rifle darts with charges of 20 g and 50 g were used. The ranges achieved were up to 360 m for the rifle arrows and more than 1,370 m for lead pellets.12)13) The effective hits were in the range of up to 300 m for lead pellets and wooden rifle arrows, up to 50 m for iron shrapnel and up to 30 m for flint shrapnel.14) The ranges, hit patterns and effects achieved in the experiments confirmed that skilled gunsmiths could use rifles of this type tactically highly effective with all types of ammunition such as rifle arrows, lead balls and blocks, when using carefully manufactured powder.15) Only arrows made entirely of iron proved impractical. The comparison of the wear marks on the barrels of the Loshult Gun and the rifle replicated for the firing tests speaks for a high probability that shrapnel bullets were also fired from the original.14)

Unfortunately, no clear evidence is known from Hamburg sources in this regard. But Wilfried Tittmann published in 1995 in his article on The Eltzer Feud of 1331/3 the very sympathic theory for us, that arrow rifles were particularly widespread in the Hanseatic area. He bases this theory, among other things, on written mentions of of a rifleman (-master) in the Hanseatic town of Soest,, Nordrhine-Westfalia (Germany) from 1330 and 1331, and the fact that the ore of the Loshult Gun came from Hungarian deposits, where Hanseatic merchants maintained close economic relations. Furthermore, he points out that four of the five Eltz rifle arrows would fit exactly into the barrel of the Loshult Gun due to their size and shape. From this, Tittmann assumes that arrow rifles and rifle arrows of a standardised calibre could have been a common commodity of Hanseatic merchants.9) 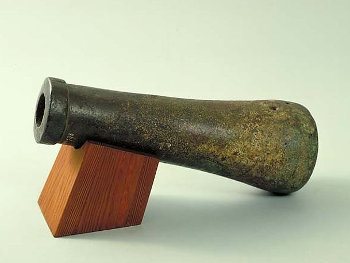 The Loshult Gun of the Statens historiska museet in Stockholm, Sweden, inv. no. SHM 289117), is the only known and preserved original of a bronze arrow rifle from the late Middle Ages. The museum acquired the rifle in 1861 for 25.— Kroner from Nils Svensson, who had found the piece while digging on his leased land in the municipality of Loshult, Skåne län province. More detailed information about the archaeological find has not been handed down. The pipe is bottle-shaped and made by bronze casting. Filing marks on the surface are probably from finishing after casting. The muzzle reinforcement has an impacted or filed rear sight, which lies along the soul axis on the direct alignment of the firing hole. The priming hole itself has no elaborated cup. The butt plate is kept relatively flat and has some indentations. The calibre of the rifle is 31 mm, with the flight flared to 36 mm towards the muzzle. The chamber is also bag-shaped flared with a diameter of 36 mm at the widest point. The widening of the flight towards the muzzle serves to better dam the arrows in the barrel.17) Due to the conical barrel and the striking similarities with the rifles in Walter de Milemete's manuscripts, the Loshult Gun can be addressed with great certainty as an arrow rifle.

The spectral analysis of a sample of the pipe in the 1940s revealed copper and tin as the main constituents of the alloy, in addition to 3 % lead, 2 % antimony, 0.1 % silver, 0.5 % arsenic and traces of cobalt, bismuth, nickel and iron. The relatively high antimony content of the alloy indicates that the copper came from Bohemian or Transylvanian ore deposits in what is now Hungary. The composition of the alloy with admixtures of a wide variety of metals suggests a correspondingly high age of the box well before the 17th century. An attempt to radiograph the piece in the 1940s to show the barrel failed for technical reasons.17) 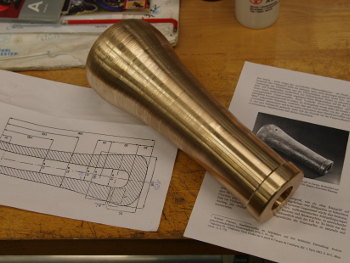 Our reconstruction attempt is based on the so-called Loshult Gun from the Statens historiska museet Stockholm and the dimensions presented by Jakobsson17) in 1944. Due to the available manufacturing possibilities and for safety reasons, we have slightly altered some of the dimensions. The starting material was a bronze bar which was turned on a lathe to a rough shape. The subsequent finishing was done by filing, hammering and grinding.

We are still discussing the exact type of lapping. The table mounts depicted by Walter de Milemete do not seem very realistic to us and impracticable in use due to the lack of possibilities to straighten them. However, some historical gunsmith and fireworks books provide further options on types of mounts.4)5)6)7)8) 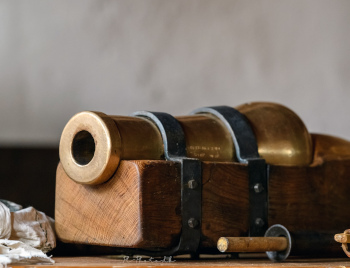